Spring and fall are great times of the year to plant a new tree. Once planted, new trees need help finding their way during their early years. Without guidance from appropriate pruning, young trees can develop improper structure.

Proper pruning is essential in developing a tree with a strong structure and desirable form. Trees that receive the appropriate pruning measures while they are young will require less corrective pruning as they mature.

Pruning of newly planted trees should be limited to the removal of dead or broken branches. All other pruning should be withheld until the second or third year, when a tree has recovered from the stress of transplanting. Two to three years after planting, you’ll see tree branches sprout into competition.

Trees in a forest compete for sunlight in close quarters, but urban trees receive plenty of light. Newly planted trees soak up the sun, which causes multiple branches to grow that compete with one another to become the “leader.” Despite having many strong branches, this makes the tree overall weaker. Without a defined trunk, trees lack the central frame needed to withstand storm damage. Plus, this could cause future structural issues, which can be costly to fix later.

To make room for the leading limb, a central branch that’s free of damage, wounds or defects is selected. Then, the competing stems to shorten or remove are identified. Ridding your tree of rival branches is called structural or subordinate pruning. The goal is to encourage the tree’s leader to grow by trimming competing branches.

Training your young tree to grow the right way is simple and quick. Plus, this small step can often prevent expensive or damaging structural corrections later. To promote the longevity of young trees as best as possible, young trees should have the following:

A. Branches that are well-attached to the trunk

B. One central leader

Most trees will be strongest if they have one central leader (instead of multiple). Unless your tree is an arborvitae or fruit tree, choose one leader to keep, and prune off the competitors.

Vertical space between branches should eventually be 12 inches for fruit or small-statured trees and 18 inches for medium- and large-stature deciduous trees. Try to space branches equally around the tree.

D. Enough clearance between the ground and first branch

As a tree grows taller, branches remain at the same height. Branches located low on the trunk may get in the way of sidewalk paths or lawn mowing as the tree gets bigger. Over time, gradually remove low branches.

The crown of a deciduous tree should be at least 60 percent of the total tree height. 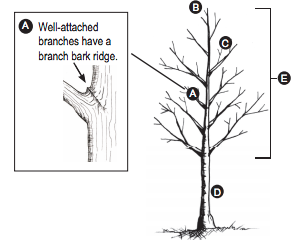 We provide professional and knowledgeable arboricultural services for both residential and commercial properties, big and small. We work year-round and specialize in safe, considerate tree and shrub pruning, removal, and planting.

Get a free quote